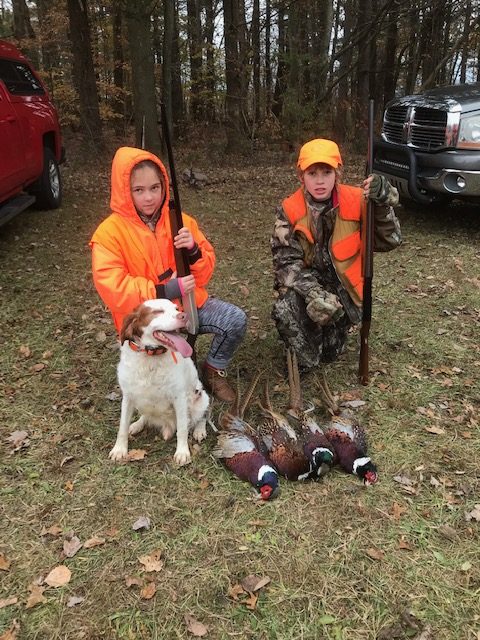 JCSC is a community club oriented toward outdoor activities including Fishing, Hunting, Shooting, Archery, and Dogs.

We donate to other groups and organizations, as well as community well-being groups.  We also offer scholarships to local students, and provide a place for groups to meet and have their own functions.

These groups include (among others)

That fox hunt netted them four hawks, one fox and several crows. They used the proceeds from the hunt for their first oyster supper (still held each spring at the Johnstown Community Sportsmen’s Club).

The following winter, in 1944, this group of hunters, along with some neighbors and friends, met in the town hall in Johnstown. Their second meeting was held at the John Deere Implement Store in Johnstown. During this meeting, by-laws were drawn up and the original twenty charter members paid their $1 dues to join.

Club meetings continued at the John Deere Store until the early 50’s. During this time frame, members purchased 25 acres from Jim Warthan. Shortly after this, the club members tore down an old house in Columbus and used the materials to build the present-day club house. The pond on these twenty-five acres was excavated just after the club house was completed. An additional eighty acres on the north side of the road were purchased from W. Adams, where another pond already existed. Five additional acres were added to the original twenty-five in 1970, and in 2006 the purchase of the Allen Farm brought the total Club-owned property to 190 acres.

The fox hunts that triggered the founding of the club continue to this day as coyote drives, with the club sponsoring several each winter. Water trials for dogs started at Walter Bishop’s pond, and when the present pond was built in the early 50’s, the trials moved to the Club grounds.

At one of these training sessions, they decided to bring used items, dogs, and even farm animals to trade or sell to each other. This was the beginning of Swappers Day. After the land was purchased and the club house built, Swappers Day moved to its present location.

Through the years, JCSC has funded many different sporting events and charitable causes. Each spring the Club grants several $1000 scholarships to local high school seniors.  We are frequent contributors to the National Wild Turkey Federation, Pheasants Forever, 4-H Camp Ohio Shooting Sports, and TIP (Turn In a Poacher).  We donate to the Leads Food Pantry, sponsor Hunter Education courses, and host swim trials and field trials for hunting dogs. One of the first community related projects the club was involved in was cutting firewood and delivering it to the needy. As the needs of our community change, the efforts of the Johnstown Community Sportsmen’s Club change to meet them.

JCSC members and their families enjoy many activities at the Club.   In a given year they can take part in our chili & oyster dinner, Christmas and Thanksgiving dinners, hayrides, wiener roasts, fish days, a Swapper’s Day Appreciation Dinner, and use of the club buildings and the grounds for weddings, graduations, family reunions and the like.